How to handle serial downvote from diamond mod

Yesterday there came this question: Gulp in Bootstrap child theme. I flagged it for being off-topic and provided a helpful link in the comments.

One of our diamond mods provided an answer to it. I downvoted this answer for being rather a comment than an answer and for answering an off-topic question. I also wanted to be fair and provided feedback about that in the comments to their answer.

This brought up some dispute in which the diamond moderator blamed some unrelated answers I gave to other unrelated questions from others for being off-topic as well.

Eventually despite considering the debatable question on-topic in the comments the diamond moderator suddenly closed it for being off-topic after they received 3 downvotes and deleted their answer. But I made a screenshot of it. 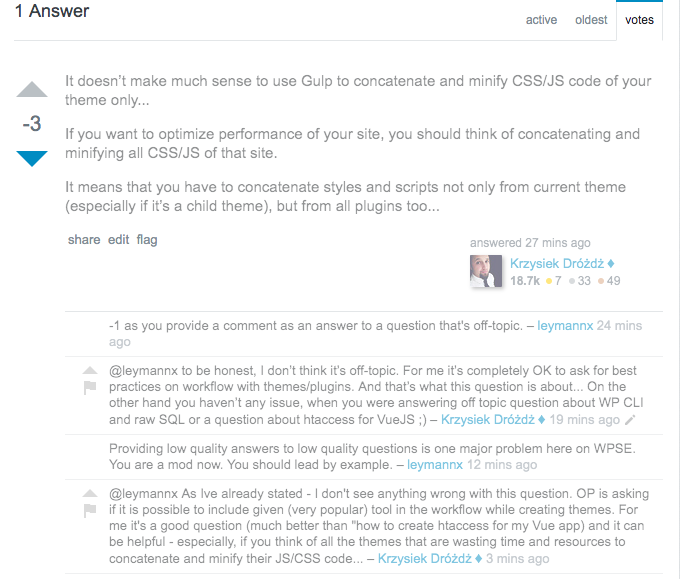 So far so good. Today I checked my account and became aware of a number of 4 downvotes to answers and question made by me to issues which the diamond moderator blamed being off-topic in the comments of the debatable answer, documented in the screenshot above. One of them dating back to 2014.

And one answer to prevent display duplicate titles on main page being edited by them with an unnecessary edit to have an upvoted retracted (which without the edit would have been locked).

For a diamond mod all of the above is absolutely unacceptable in my eyes. How does the community react to such events? Is there anything I can do to be protected from further actions by them against posts I made?

Revoking diamond is not something taken lightly. It's also not something the WPSE team can do but would need to be escalated to the higher ups. If this is something you feel needs escalating then please refer to this meta post regarding contacting the SE team. They would be able to investigate the issue further and take any actions they deem necessary.

That being said, I personally don't think that this issue needs escalation though I do understand you feel this is targeted specifically at you. StackExchange has pretty good tools for finding, reporting, and reverting serial voters (up or down) which it sees as vote manipulation.

If you find your question/answers not receiving expected responses that is an opportunity to edit your post and expand upon it, adding more information, and ultimately making it better than before. Regardless how the immediate response to a post is, a good post will get the attention it deserves over time.

Being a moderator is just as a learning experience as anything else. Almost anyone on WPSE has the chance to become a moderator during an election. It does not require any previous moderation experience or even WordPress experience for that matter. We are all volunteers here giving our free time to keep this community afloat. We are human. Mistakes can be made of which we must learn from them and do better over time.

If you cast 10% of your daily votes as downvotes on one pretty active user and claim this happened merely by accident you are not capable of being a diamond moderator.

If you start a dispute with counter attacks you are not capable of being a diamond moderator.

If you don't recognize that what you are doing harms the community you were elected to represent than you are not capable of being its representer in form of a diamond moderator.

If you cast premature upvotes and then do unrevised neglectable edits to unlock your vote and retract it you are not capable of being a diamond moderator.

I don't think this person should go on being a diamond moderator and vote for this role being revoked from them.

I have, as impartially as possible, analyzed the moderator's activity.

He's objectively doing a good job (in terms of activity, accuracy measured with having a good understanding of community rules).

I'm nor supporting him, nor against him but I acknowledge the mistake(?) he did. Why he did it is simple. We're all humans with an ego and whenever someone does something against us, the only thing that's stopping us from going against that someone is either our lack of power or the constraints of the situation, in this case, the moderator decided to give in to his instincts.

Does this make him a bad person? No. We all have this. Yes, some, him included, might argue that the user's activity startled him to go on a very lengthy investigation, but come, on, we're not 12, although his down-votes might be accurate, the motivation is clearly ill.

It was his first mistake. Let it go with just a warning. He'll now understand that if he does this again, he's out, so, lesson learned, well, at least until the next incident as we're constantly playing a game of power with each other where the players constantly change their positions.

As I've said, it's all about your constraints and people will act very differently when they think they have power / the upper hand, so, to take action, on the first offense, for what is just human nature is a bit too steep. We all have this type of behavior because everybody wants to own the world.

As a side-note to anyone engaging in such behavior: whether or not it was a weak moment, I can't tell, but I've never seen any of my successful friends, me included have these outbursts because we understand how the game works. If you don't understand this, then you're not playing "the game" and this is one of the biggest factors to your lack of success. Exercise objective & composed thinking at all times.

Not the answer you're looking for? Browse other questions tagged discussion moderators votes .