Did changing the site's name reduce the number of bad questions from new users?

A few years ago, this site was called WordPress Answers. After much negotiation, the Community team agreed to rename it to WordPress Development. That change occurred around March 1, 2014, so it's been just over 2 years. Do we have any evidence that anything changed as a result? In particular, did the change stem the tide of unwelcome questions from new users?

I'm writing this as an answer and not in the question itself because I'd love to see some counter-evidence. You see, I'm skeptical that name changes will make any difference to the way sites are used. (This doesn't mean I haven't suggested the move myself.) This site could be a data point confirming my suspicion that name changes do not noticably change new user behavior.

One of the things that concerned us about the name change was that it would discourage some potential new users (including some who are potentially valuable) from joining the site. The data does not show that fear to be justified: 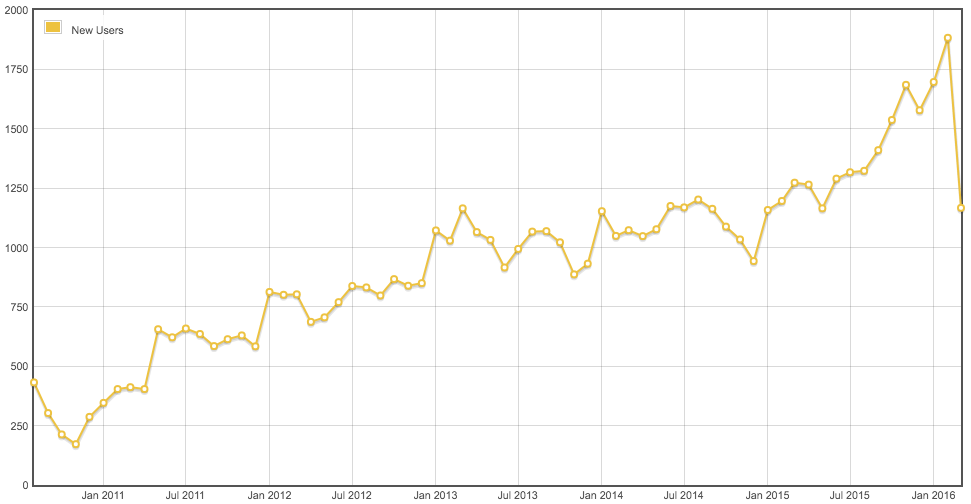 (Note: each image is linked to a query on the publicly available database similar to the internal database I used to generate the data. This one happens to be identical, but others differ because the public data limits access to deleted posts.)

There was no real change in the rate of new users joining the site in 2013 or 2014, but there was accelerated growth in 2015. So I don't lose any sleep over the name change from the perspective of the user base.

For the purposes of this study, I'm going to set an extraordinarily low bar for a "good" question:

All other questions are labeled "bad". I'm only looking at questions from new users asked within two months of creating their account. I'm also looking at accounts created in 2013 and 2014 to fit into the relatively stable influx of new users. Overall, the gap between open questions and closed/deleted questions actually narrowed after the name change: 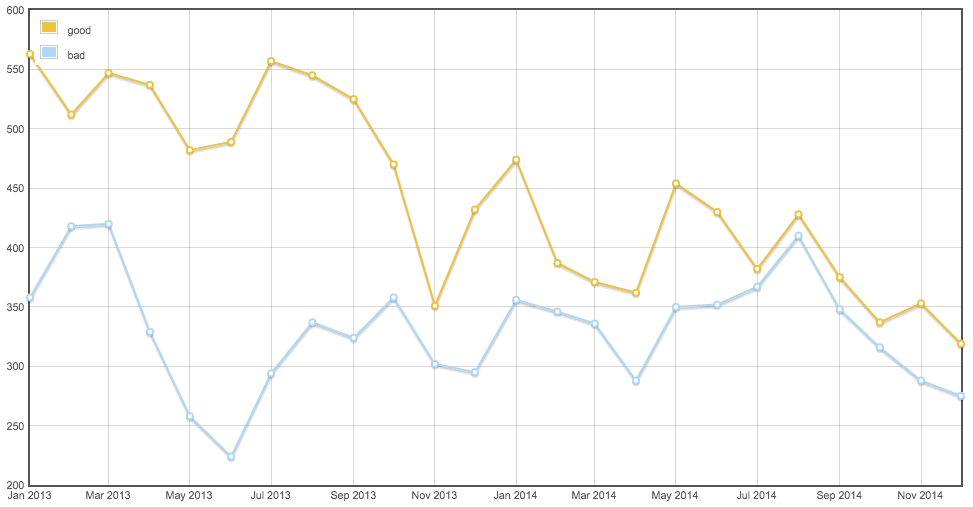 Looking 90 days before the change and 90 days after, we can quantify the difference it made in terms of question quality:

While there are fewer closed and deleted questions immediately after the name was changed, there were fewer questions overall. If anything, new users asked worse questions on average after March 1, 2014. It's also clear y'all spend considerable effort clearing out questions that are not answerable or useful. So the frustration with a less-than-ideal name was certainly justified.

This isn't to say the new name didn't help. But the effect was marginal and completely washed out by larger trends in what people ask about and how. For instance, a common complaint on this meta is with WooCommerce questions. These are officially off-topic and yet they have become more common over the years: 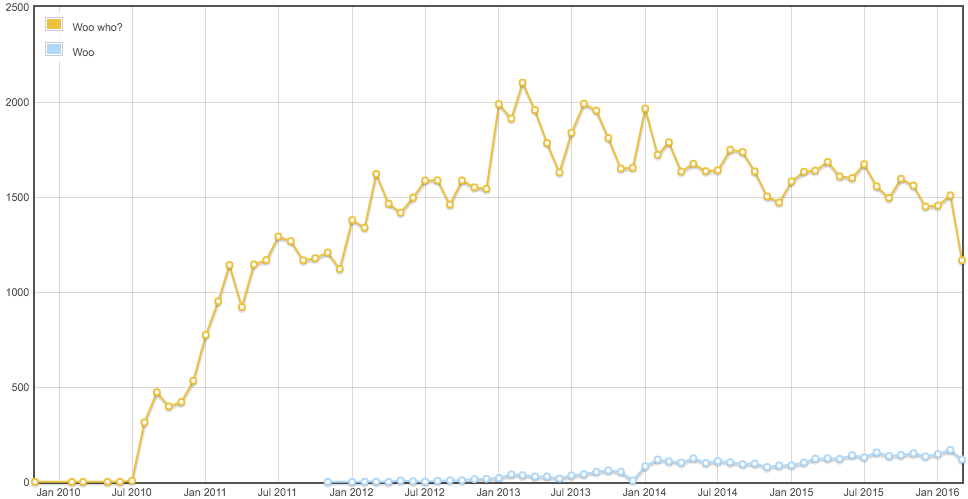 People increasingly asked about WooCommerce in the months leading up to the name change and continued after it. The trend almost certainly has more to do with things outside of our control (such as changes to WooCommerce's support system) than anything in our power.

There may be many reasons to change a site's name, but the data from this site's name change indicates we should not expect it will increase the quality of questions from new users.

I think it might be summed this way - software developers (at least the good ones) like a descriptive unambiguous names. This does not by itself prevent bugs or help solve them but it does help in getting a general idea on what a thing is without a need to scan the code (or FAQ) to find out.

It probably do not make any difference to new users which spend 1 minute writing a bad question even if they know it is off-topic, just because there is a chance someone will answer them, but my gut feeling is that there are almost no trivial wordpress usage question, and even the off-topic ones are in some development related context even if it is still off-topic.

Even woo-commerce is not a black and white thing and those questions might get an on-topic answer because while the question might be in the context of woocommerce, it comes from misunderstanding or lack of knowledge of some core principal of wordpress.

12
WordCamp Phoenix 2012 - Sponsorship Proposal
23
Let there be blog
5
Tags are getting out of control - sky is the limit
5
Is there any point in close voting questions as off-topic?
0
Is there way to ask even opinion based or non programming question but if it is useful for WordPress Developers?
2
Banned from asking questions
10
3-vote close - how's it going?