As some might know, we have LoopChat, which often features hilarious quotes. All those were extracted from our favs list - the "starred messages".

But often "starred"/faved quotes get out of context and aren't funny anymore when you don't know the whole dialogue.

Request: Let us bulk-"star"/fav messages, so we can as well save the best, most intelligent or just the most funny discussions in chat.

Do not use multiple stars to bookmark a conversation, use the create new bookmark feature instead.

You can find it in the upper right corner of the chat under room: 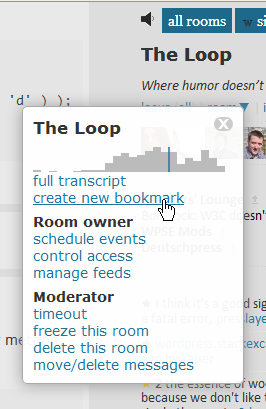 A list of existing bookmarked conversations is available on the room information page.

Not the answer you're looking for? Browse other questions tagged discussion feature-request .