I suggest the namespace WPSE for the code snippets we use in our answers.

Namespaces are a feature of PHP 5.3; WordPress core requires just PHP 5.2.4 currently. But even PHP 5.3 development has stopped already, PHP 5.4 is the stable version now, and 5.5 will be out soon.
PHP 5.2 was last updated in January 2011. Since then it didn’t even get security patches.

The WordPress ecosystem suffers from a copy&paste culture. We could use that to promote PHP upgrades. The more servers are updated, the sooner the core can update its requirements. I think we should discourage the use of insecure software.

Here is a sample plugin to illustrate how it could look:

I like the idea, but I don't think it'll work.

The premise is that because an answer on the stack exchange site does not work for them (because they are using outdated php), they will upgrade. This assumes one of the following, with decreasing credibility

My point is that people use WPSE, and WPSE is so popular, exactly because its the path of least resistance to the solution of their problem. (Yes this inevitably means we get a drive-by culture...) but if we starting posting answers which won't work on ~40% of servers then I think it'll damage WPSE's reputation has being a valuable resource for users.

Of course most developers will know to ensure their host is providing them with up-to-date software before registering with them - but the fact is WPSE has a large contingent of 'entry-level' users who would not.

This may work to 'raise awareness' - but I'm not sure how effective it'll be in pushing through changes to servers (it's a lot harder to get your host to do something it doesn't want to, than it is to just find a different answer).

As for a WPSE namespace, I like it - but I won't be using it my answers just yet :)

While I agree that most seasoned developers are running on a system that uses a better version of PHP, I disagree that using a namespace should become a standard convention. As you already pointed out, WordPress only requires PHP 5.2.4, and there are no signs of that changing in the immediate future.

Yes, many developers know how to refactor their code to not depend on PHP 5.3+. But many developers also come from the copy-and-paste culture - which means they're lazy. If their test server is running 5.3 (or 5.4 or 5.5), and the code works in the testbed, why rewrite it? I have had at least 20 people contact me via twitter or my website contact form because they've copied a function lambda into a plugin, tested it successfully on their own site, released it in a plugin, and had people complain about errors.

Until WordPress updates its minimum requirements, we should continue to support the lowest common denominator.

I like the idea-- it would save me from writing _wpse_XXXXXXX after every function-- but I don't think it should be a consideration until WordPress officially requires PHP 5.3. Once that happens, most of the objections become mute. If namespaces don't work, chances are WordPress doesn't work so it hardly matters. And once that happens I'd vote for the I wouldn't mind the WPSE\username\ pattern.

Another issues is going to be enforcement-- there won't be any. It will probably mean more "maintenance" edits to have any consistency to it.

As far as encouraging hosts to upgrade, just recently I had a major player in the business class bundled hosting/telecom/ISP industry refuse to update even to PHP 5.2.4. The best I got was "Yeah, we'll upgrade eventually but we don't know when."

I agree on the ugliness, but I think a better option for now and the foreseeable future is to use a small docblock.

Also the full url is a great reference since some posts have multiple answers and useful discussion/links. Plus if the code has an issue or changes, the answer can be revisited and adjusted at a later date, especially if the copy/paste has a viral nature.

This is actually a terrible idea, and I would suggest that we should not only reject it, but disallow it and actively edit people's answers to NOT have it.

Despite how much you want to argue about PHP having moved on, the rest of the world clearly has not. PHP 5.2 is still actively used by more than 55% of WordPress installs. 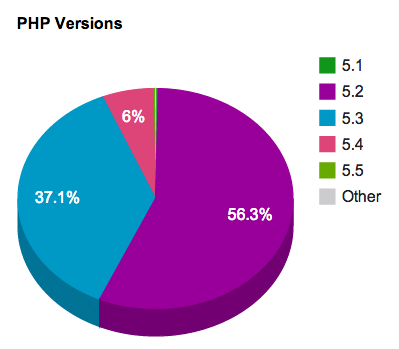 So the upshot of the suggestion is that you want to actively make code in answers not work for the majority of the user base. This is problem 1.

The result of this would eventually be people saying "this code broke my site" and other people responding with "take out the namespace declaration and it will work fine". This is problem 2.

As a result of problem 2, you are introducing code to the public which, after being "fixed" by well-meaning users who are just looking for solutions to their problems, have inadvertently introduced non-prefixed code into their installations, polluting their global namespace, and potentially introducing even more problems down the line from having all these hastily named functions in there. Let's call this problem 3.

So there's three problems with the idea. In my view, any one of these problems is enough to reject the concept entirely.

Namespaces are a great idea. But introducing them as some kind of active attempt to force the majority to upgrade, well, that isn't as great of an idea.

Not the answer you're looking for? Browse other questions tagged discussion code .

4
WPSE Content Scraping?
9
What ever happened to the WPSE blog?
12
WordCamp Phoenix Follow-up
12
WPSE Community Day!
10
is the following question appropriate for WPSE
2
How would I best phrase this WordPress development question?
9
Can we re-discuss plugin related questions with popularity in mind?
6
Do WPSE editing guidelines align with the rest of Stack Exchange?