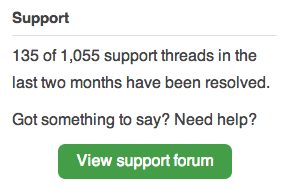 51
Update our FAQ and abandon theme/plugin recommendations
16
What if … third party specific questions would be on topic?
11
Dealing with WooThemes/Commerce Questions
15
Adopt a tag! Help to keep our site clean
4
BuddyPress Question Flagged as Off-Topic on WordPress SE
9
Is it possible to black-list/ban the [plugin-recommendation] tag?
0
At what point will WooCommerce be considered relevant to WPSE?
2
Would requiring new users to take a quiz on the FAQ improve question quality?

11
Dealing with WooThemes/Commerce Questions
6
With shopping questions off-topic now, should the associated tags be removed as well?
7
Woocommerce questions flooding WPSE
16
What if … third party specific questions would be on topic?
2
No more concensus about what is on and off topic
23
Is WooCommerce off topic?
1
Reconsidering Make Some Plugin related Question as On-topic
5
How to ask off-topic questions: just award a bounty
6
Is BuddyPress Off Topic?
9
woocommerce-offtopic isn't working